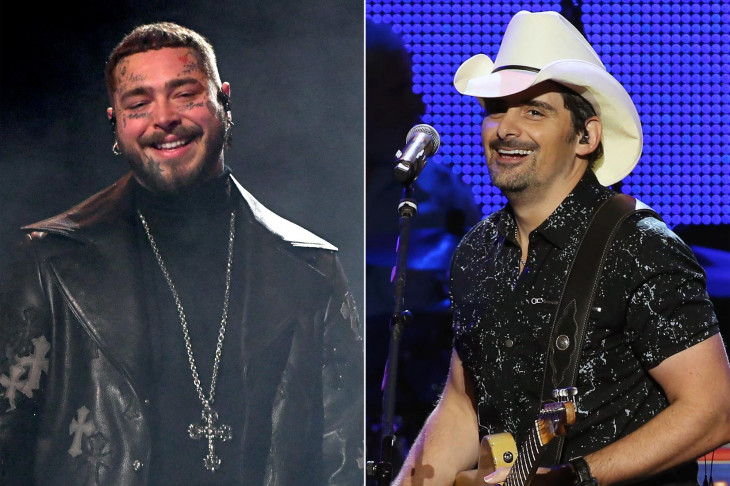 Paisley commented positively on Post Malone's cover version, saying, "This is better than me."

Post Malone is earning praise from none other than country music singer-songwriter Brad Paisley, for covering one of Paisley’s early country hits.

The “Sunflower” singer posted a video clip to TikTok featuring a performance of Paisley’s 2002, two-week No. 1 Country Airplay hit “I’m Gonna Miss Her (The Fishin’ Song).” The clip is from a 2021 Post Malone performance as part of the fundraiser We’re Texas, an event organized by actor Matthew McConaughey to support the state of Texas following a devastating winter storm in February 2021 (Post Malone’s performance also included a rendition of Sturgill Simpson’s “You Can Have the Crown.”).

Paisley commented positively on Post Malone’s cover version, saying, “This is better than me.” Paisley also changed out the bio on his TikTok page to read “I write songs for Post Malone.”

Malone quickly responded, saying in a follow up video, “Brad, there’s no shot, man. I love you so f—in’ much man, thank you for the love, dude. I owe you a beer, man. Text me, I’ll see you soon.”

Earlier this year, Post Malone said during an interview on SiriusXM’s The Howard Stern Show that he intends to record a country album.

“To be honest, there’s nothing stopping me from taking a camera or setting up in my studio in Utah and just recording a country album [and releasing it] on YouTube,” Malone said. “I’m allowed to do that, I’m a human being.”